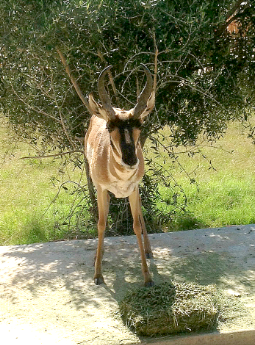 What is a pronghorn, you ask?

That is a great question! Although the pronghorn is similar to deer or antelopes, they belong to a family all their own. They live across North America, spanning from southern Canada to Mexico, according to the National Wildlife Federation. They prefer to dwell in open fields, plains, grassy areas, and desert type environments. According to National Geographic, pronghorns are the second fastest mammal in the world only second to the cheetah. Clocking speeds of up to sixty miles per hour! Pronghorns are also known for having one of the longest land migration of any animal in the United States! Trekking in large herds about one-hundred and fifty miles one way between the Upper Green River Basin in Wyoming and Grand Teton National Park. Because of their speed, they are able to to easily outrun predators such as coyotes or bobcats, but also can run great distances at half of their maximum speed.

The pronghorn’s coloring is a reddish brown with distinct white patches on their stomach and throat. Some subspecies can have patches or stripes of black as well. They also have a unique white warning patch on their rear end that  can be seen for miles and is raised when startled. Both sexes have large, black horns that split off into forward pointing prongs, which is where their name originates. Defenders of Wildlife says that pronghorns are commonly referred to as “Ghosts of the Prairie” due to their elusive behavior.

I had the opportunity to interact with a Sonoran pronghorn named Mario (pictured above) during my internship at Wildlife World Zoo. I reached out to his former zookeeper, Ashley Korenblitt, who I have remained in contact with in order to get some fun facts about this unique species. Ashley told me about the warning patch and how they fluff up their tail when on alert, which she says she finds cute. They actually show off this white patch in order to warn other pronghorns about potential danger.  They have strong vision which is relied upon to avoid predators. Ashley also told me about their intelligence, and how they have the ability to recognize barriers and avoid them.

Pronghorns are herbivores and eat various grasses and shrubs found in their natural habitat. They migrate during the winter in order to have access to better feeding grounds. They reproduce in the late summer or early fall and the females have one or two offspring. The average lifespan of a pronghorn is about ten years.

According to arkive.org,  before the European settlers came to North America, pronghorn numbers were in the millions. By the 1920s, the population had crashed to a mere 20,000 individuals. The Conservation Planning Specialist Group says that the pronghorn was one of the first species declared endangered in the United States. However, thanks to the tireless efforts of conservationists, we have managed to bring the numbers of pronghorns back up to about 700,000 across North America. They are currently listed as least concern by the World Wildlife Federation. Although their populations are thriving, they do face some threats. Urbanization, new fences, roads, cars, shopping malls, and people all threaten the safe migration of the pronghorn. These animals take the same routes during migration as their ancestors, but with habitat destruction for the benefit of humans, the pronghorn has to face change in migration route and separation of herds. There are currently efforts by various organizations, including WWF, that are advocating for keeping migration routes clear to keep the pronghorns safe.

Subspecies of Pronghorn that are Endangered

The Sonoran pronghorn, which is the subspecies pictured above, is listed as endangered. In 2002, this species was almost completely wiped out by drought. Climate change, habitat loss, and human activities are listed among the many threats that have caused this species to become endangered. The good news however, is that the Sonoran is on the road to recovery thanks to conservation plans put in place by the United States and Mexican governments in the 1980s and 90s.

**This post was previously published on the author’s former blog**