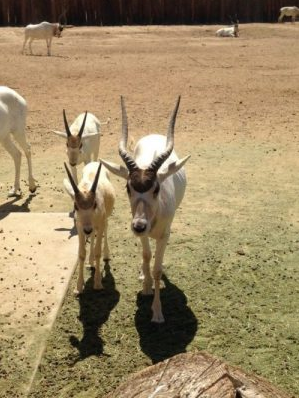 The addax antelope is one of the most critically endangered species of antelope. No one is certain of the exact amount of addax left in the wild with numbers ranging from only three to fewer than one hundred individuals.  One thing however is certain, this species is critically endangered and extremely close to extinction in its natural habitat. Although on the verge of being wiped out in its native habitat in northern Africa, the species is fortunately thriving in captivity with approximately two thousand individuals in zoos and sanctuaries worldwide. I was fortunate enough to get to experience the addax antelope up close and personal during my internship at Wildlife World Zoo, Aquarium, and Safari Park in the summer of 2016. As you can see from the featured photo, quite a few babies were born to the addax that summer.

Both the male and female addax have long, spiraled horns and a bright white coat. The coat color actually reflects light keeping them cool in their desert habitat. Arkive.org describes the addax as also having a have brown coloration and tufts of brown fur (that in my opinion resemble a toupee) around their forehead. The males are generally ten to twenty percent larger than the females, weighing up to three hundred pounds and standing up to forty-five inches tall measuring to the shoulder. The addax is very adapted to the extreme heat with specially adapted splayed hooves to help them through the sand. Addax antelopes are herbivores and actually receive most of their water through the plants in their diet.  They produce highly concentrated urine to help conserve water and excrete dry feces, says livescience.com. They actually absorb and use every drop of water they consume! When addax populations were abundant, females generally produced one offspring a year which were born a light beige color for camouflage with their sandy environment.

At one point in history, the addax roamed the entire northern region of Africa but now the minuscule number of individuals left only exist in the Termit & Tin Toumma National Nature Reserve in Niger, Africa (IUCN). A social creature, addax naturally form herds with about twenty individuals with a strong male taking the role of leader.  Before the significant decline of the addax, the antelopes would migrate each season between the Sahara and the Sahel with groups seen in the thousands.

The main reason for the rapid decline in addax population is overhunting. The meat and leather produced from the animal is valuable to the indigenous people. The addax is also slow-moving making it easy prey and no match for the modern weapons used for hunting today. Some other reasons for the near-extinction of the species is drought, desertification (the process of fertile land becoming inhabitable due to a variety of factors), as well as habitat destruction for agricultural use and expansion.

The short answer? Yes! Fortunately, the species is highly protected due to its critically endangered status. International trade is prohibited by the Convention on International Trade in Endangered Species (CITES) agreement and the individuals left in the wild are located in a protected nature reserve through the Sahara Conservation Fund. The other upside to the tragic circumstances of the addax is that they are thriving in captivity. Many activists criticize keeping animals in zoos or sanctuaries but this is one of the many cases in which captivity has saved a species from extinction. Many organizations that keep some of the two thousand individuals in captivity are working on reintroduction programs in order to build up the wild populations.