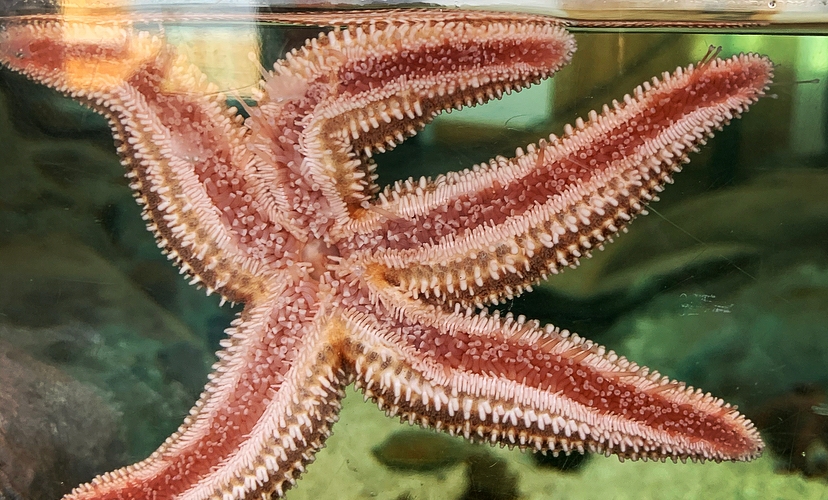 1.Sea Stars Are Echinoderms, Not Fish

Despite commonly being called starfish, sea stars are not a fish species. They do not have gills, scales, or tails like fish. They also do not have a backbone, so they are considered an invertebrate species. More specifically, they belong to a family called Echinoderms. Being an Echinoderm means that members of these species have five-point radial symmetry (even though some sea stars have different numbers of arms! (See fact number 2)  Some other species in the Echinoderm family include, sand dollars, sea urchins, and sea cucumbers.  Another interesting characteristic that makes sea stars unique is how they move through the water. They have small tube feet under their body that helps to propel them through the water. These feet also have suction cups which allows the sea star to attach to rocks and prey. There are approximately 2,000 sea star species, all of which exist in ocean habitats.

2.Some Species of Sea Stars Have Different Numbers of Arms

Although we generally think of a sea star with five pointy arms, this isn’t always the case. In fact, some species of sea star can have anywhere from 10, 20, or even 40 arms, such as the sun star species. On the other end, a species called cushion sea stars appear to look like a blob with no arms. Sea stars have the amazing ability to grow new arms if one is injured. Some can even regenerate an entirely new sea star from a damaged limb. This process of regeneration takes about a year.

3.Sea Stars Do Not Have Blood

Instead of blood, sea stars have a special circulatory system, called a water vascular system, that pumps sea water through their bodies. The sea water delivers nutrients to the sea star, as blood would in mammals.

A sea star’s mouth is located on their underside. They also have two stomachs!  Their prey generally consists of  mussels, clams, snails, and other bivalves. When they find their prey, they wrap their legs around their shell and open it enough to push its first stomach through its mouth and into the opening. Then, they slide their stomach back into their body and the food drops to their second stomach where it is digested. This unique way of eating allows the sea star to eat prey that it would not otherwise be able to fit into its small mouth.

5.Some Sea Stars Can Switch Their Gender

Sea stars are gonochorous, which means they are born either male or female. Although many species retain their birth gender their entire lives, many species have the ability to switch their gender. For example, all cushion sea stars are born male and later switch to female for reproductive purposes. All sea star species can reproduce sexually or asexually by regeneration.

**This post was previously published on the author’s former blog**

One thought on “Five Fascinating Facts About Sea Stars”